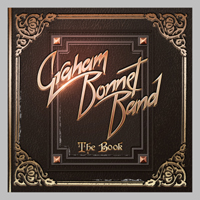 Legendary vocalist Graham Bonnet (Alcatrazz, Rainbow, Impellitteri, and Michael Schenker Group) has been keeping himself busy these past few years. Apart from working with Steve Wright on a biography, performing with Michael Schenker in Sweden and Japan, reissuing a ton of old (but great) material, and touring the UK with Catch the Rainbow in 2014, he has kept himself occupied with a brilliant band simply named…well, you guessed it; the Graham Bonnet Band. The band has toured quite extensively ever since its inception, but finally, after waiting for what seems like forever, the debut album is about to be released in early November. Entitled "The Book", the album contains 11 dynamic and kick-ass tunes that rule beyond belief, but it does not quite stop there. There is also a second disc containing re-recorded classic cuts that nicely summarize Bonnet’s extremely impressive musical past. This 2-disc release is like a dream come true for those of us who worship the man’s inimitable voice!

Where to begin? The album opens with the face-melting "Into the Night" followed by "Welcome to My Home" and "Earth’s Child". There is so much energy present, and the whole band is simply on fire. Guitarist Conrad Pesinato pulls off some wonderful stuff, and there are so many well-crafted riffs and wicked melodies throughout the album that it borders on the surreal. Drummer Mark Zonder is a pure genius, and Beth-Ami Heavenstone lays down some great and pulsating bass lines. The keyboards by Jimmy Waldo also add a nice touch to the songs and are quite atmospheric in places. Classic hard rock has rarely sounded better. This is timeless stuff! The soaring voice of Bonnet infuses each track with depth, substance, and emotion. Songs such as the melancholic "Rider", the epic "Dead Man Walking", and the hard-hitting "Strangest Night" are simply begging to be performed live in front of a hungry crowd. We are talking future hard rock classics here, folks. "The Dance" is perhaps the most moving song off the album.

As to the second disc, it has to be said that even though it rocks and is a pleasure to listen to from start to finish, the majority of songs that comprise this disc do not blow the original versions out of the water, but I do not think that is the point either. To have such a strong, tight, and solid band record those classics and include them as a bonus is a treat unlike no other. I mean, what is not to love about that? As I said earlier on, the second disc also provides one with a great overview of some of Graham’s finest tunes from his past. I especially love the 2016 versions of "Eyes of the World" and "S.O.S.".

I do not care if you are familiar with Graham Bonnet’s musical past or not. That is beside the point. The fact of the matter is that if you are into sublime hard rock performed with class and aggression, you sorely need this album. To me, this is one of the best releases of the year. Yeah, you read that right!