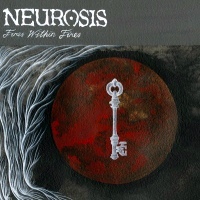 I am neither a fan of Neurosis nor am I even familiar much with their discography. I remember "Through Silver And Blood" because they released it around the time I saw them open up for Pantera in Chicago’s Aaragon Ballroom in the late 90s, and I reviewed some of their work after 2007, so I have a general idea of their sound. I approached "Fires Within Fires", then, without any expectation, on its own merits. And my impression is that it is rather a weak effort.

The five tracks seem to drone on and on, now Toolish in their mellow melancholy, now Black Sabbathian and Mastodonian in moments of rare if noticeable aggression. The vocals are excellent but I noted two moments where I actually wanted to listen to this album: "Fire Is The End Lesson" with its innovative use of violins and the closing "Reach" around 5:30 where Neurosis sounds like "Jail" off of Down’s NOLA album. Other than that I found this a pretty boring record despite its view moments of good to great riffing such as the opening "Bending Light"  halfway or "A Shadow Memory". And why "Reach" had to be over 10 minute long is a mystery.

With no expectations Neurosis’ new album is not a let down but neither is it exciting. Given the sheer quality of some of the recent releases duds are expected.