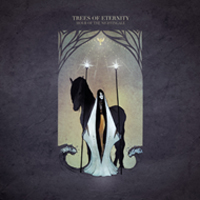 TREES OF ETERNITY – Hour of the Nightingale

The story behind Trees of Eternity is without doubt one of the most tragic and haunting back stories we could ever read. It all began with singer-songwriter Aleah Starbridge contributing vocals for Swallow the Sun. As Aleah and Swallow the Sun guitarist and partner Juha Raivio were working on the track ‘Lights on the Lake’, they started messing around with a few ideas that carried them on an entirely separate path. Trees of Eternity was originally conceived as an acoustic project, but as the ideas continued to flow this eventually grew into a fully-fledged band featuring the Norman brothers (ex-Katatonia) and legendary drummer Kai Hahto. They continued to work on the album for three years, all of which came to a halt when Aleah passed away during the album’s final post-production phase.

As if the tragic and untimely ending of the personal and musical relationships involved was not enough, the story is made especially poignant by the fact that for most listeners, their encounter with the ethereally beautiful and endlessly talented Aleah Starbridge begins and ends here.

At the heart of it all, ‘Hour of the Nightingale’ is an evocative creation of mournful gothic doom. What makes it so special is Aleah’s energy shining like a silver beacon through the gloom. Her vocals and lyrics come from a place of such peaceful, restrained composure that they cannot fail to be uplifting. Juha’s contribution as a composer is not to be underestimated either. It takes a few spins for the nuances and deeper parts of ‘Hour of the Nightingale’ to become apparent but once that happens they never fade back into the shadows. This really is a superbly measured, mature and understated collection of songs. After dozens of listens, each track is still getter better every time.

A heartbreaking celebration of a star that shone brightly but all too briefly.

MARTIN POWER – No Quarter: The Three Lives of Jimmy Page