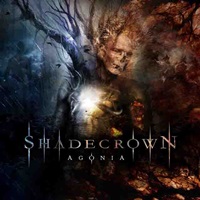 Finland is home to a wealth of talent in the underground metal community – probably due to the success of bands like Amorphis, Children of Bodom, and the much missed Sentenced. Relative newcomer Shadecrown are a sextet that have been active since 2012 – releasing a self-titled demo and "Chained" EP a year after entering the scene, setting things up for this debut full-length "Agonia". Describing themselves as a melancholic melodic death metal band, you can expect a dark, doomy nature to a lot of the proceedings – the keyboards and softer textures setting up atmospheric moments of bliss and ecstasy.

A curve ball comes into the picture with the relatively charging, up-tempo "Walk Through Hell", the uplifting opening riffs more in line to their Swedish melodic death brethren, but the catchy transitions and slamming main hook can be linked to that Sentenced legacy which still penetrates the scene. Clean and deep growls intertwine – the latter akin to early Scar Symmetry, discernible and delectable all the same on the eight minute plus epic opener "Eremophobia", where a prolonged instrumental start sets up a series of cultural-oriented guitar themes through the driving doom to mid-tempo drum shifts. These musicians understand that more often than not, simplicity can be built up into this intoxicating aural arrangement – the echoing refrains of "Longing for Sleep" move the headspace into clouds and tranquility. There’s even a disjointed, almost progressive jagged quality to sections of "The Ruins of Me" that keeps Shadecrown into more original territory, the lead break breathtaking in its tasteful pacing and speed.

"Agonia" contains a boatload of ideas and songs to enjoy, especially in a headphone, solitude-oriented capacity. So if you love melodic death and doom careening against more of a latter day Sentenced platform, Shadecrown could be a welcome savior to satisfy your metal needs.

TREES OF ETERNITY – Hour of the Nightingale