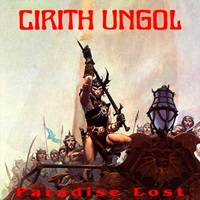 With a reunion show at the Frost and Fire festival lurking on the horizon, makes sense that the cult classics from California Cirith Ungol start reappearing in the market. "Paradise Lost" would be the group’s fourth studio record, originally hitting the streets on Restless Records in 1991 – making this a 25th anniversary celebration of said album. Beyond the 9 original songs we get 5 alternative mixes of the same material – which pads out the CD length but in the end, most will carry about the original songs and embody the heavy/doom metal pioneers who continue to be underground favorites even if never really hitting the big time in the scene.

The material wavers between mountain-top riffing with standard metal posturing such as "Join the Legion" and "Heaven Help Us" plus obvious attempts at softening their sound for commercial acceptance, as "Go It Alone" has a lot of that Sunset Strip happy-oriented chord progressions and easy on the brain chorus work that could be a distant relative to "Screaming for a Love Bite"/ Accept. Latter guitarist Jim Barrazza lays down some thick, intuitive Maiden-esque riffs and breaks during the 8:40 "Chaos Rising", while vocalist Tim Baker channels all of his grit and power to the highest degree, bringing him to the elite class of doom/traditional heavy metal singers.

Overall "King of the Dead" and "One Foot in Hell" hold premiere status in the Cirith Ungol catalog, but there are some decent tracks here that make it worth your while. Especially if by the early 90’s thrash, death, or alternative /grunge-oriented music took over your stereo and you remained oblivious to the true/traditional metal pack. And who knows, maybe the reunion will spark another studio album down the line?