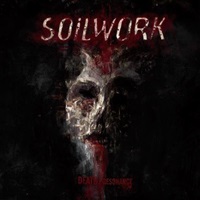 Hot on the tour trail and not wanting to leave fans waiting for more material in the interim, Soilwork felt the time is right to pool together a lot of their bonus material over the past decade only available in certain parts of the globe plus record two new songs for "Death Resonance". As a listener you’ll get 15 songs (five of which gain a 2016 mix), the first two cuts being the freshest in "Helsinki" and the title track. Trademark Speed Strid growls and clean melodies plus shifting moods musically showcase these Swedes at their prime for the former – a great intertwining of melodic thrash/death with groove and extremity always lurking on the horizon – while the latter just has this blasting meets tribal energy that against the riff changes and introspective organ interlude sets you up for the next kinetic swing.

Tracks four through eight come from the "Beyond the Infinite" EP that only saw a Japanese release, as the rest of the world consumed the double album "The Living Infinite" – with "My Nerves, Your Everyday Tool" containing a lot of twin guitar melodies that elevated the band to headline status during their "Natural Born Chaos" period, while "Resisting the Current" has this speedy side shuffling/spacious guitar vibe that could have been welcome on the latest record "The Ride Majestic". Reaching back into the mid 2000’s albums for "Martyr" and "Wherever Thorns May Grow" and giving them a 2016 mix sheen boosts the impact.

Overall, there’s an hour of material to ingest, and it’s not like Soilwork tend to release songs that aren’t of a high quality level. This will give the band enough time to still get back their road legs and hopefully deliver another stellar full-length by 2018 – as it’s not your typical cash grab compilation that is label related.