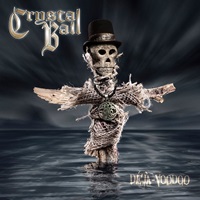 Wasting no time getting back to business after last year’s "LifeRider" record, "Déja-Voodoo" as the ninth Crystal Ball studio album continues to position this Swiss act as one of the steadiest in the melodic metal marketplace. Even as they gain a new guitarist in Tony Castell, the quintet surrounds themselves with the right songwriting ethics and proper execution to delivery plenty of toe-tapping, head banging hooks and solid metal grooves.

When they choose to go for a more mid-tempo anthem template on "Never a Guarantee" for instance, you can feel the Accept-oriented rhythm crunch against the larger than life vocal harmonies for the chorus, while vocalist Steven Mageney slithers about in lower registers during the verses. A heavier cut such as "Dr. Hell No" still features a semi-danceable drum movement from Marcel Sardella which along with the keyboard accents could be a future favorite should the band choose to make it a part of their live arsenal. A lot of American influences creep in when the band elect to engage in a ballad-oriented song, as "To Be with You Once More" has a lot of Great White meets Dokken flavors, especially in the clean electric tone choices and pacing.

Stefan Kaufmann’s digital production skills from Roxx Studio in Germany makes Crystal Ball’s job so much easier – keeping their eyes on the performance prize. At times the occasional line can border on the cheesy side (‘we are living to rock/ and we are rocking to live’) for "Reaching Out", but the sentiment and reference points regarding lost heroes like Ronnie James Dio make up for that small faux pas. In the end, those who have been following the group for years will dig "Déja-Voodoo" for certain, as it’s a logical follow up to their recent platters, and should have people walking away humming and singing along to their engaging brand of melodic metal.