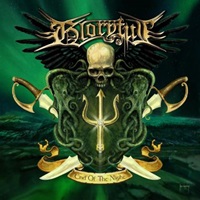 GLORYFUL – End of the Night

The third studio album from German power metal band Gloryful keeps the true vision of the band alive. "End of the Night" continues the Legend of Sedna – hundreds of years after the demise of the "Ocean Blade". Fear not brethren, the twin guitar harmonies and thunderous double bass as well as multi-octave melodic vocals still resonate as Gloryful trademarks – songs such as "Hail to the King" and "God Against Man" sure to align well with the Iron Maiden, Running Wild, and Gamma Ray fans worldwide.

Even with a new second guitarist in Adrian Weiss, the quintet know that the fans do not desire much variance from a tried and true formula – hitting the listeners with hooks on both the vocal and musical front, while keeping the energy level at peak performance. The longest song "On Fire" at 6:22 has background vocal work that resides in Hammerfall/Blind Guardian territory, while the cultural/ marching strains on guitar and drums give off a definite Running Wild impulse, encouraging lots of audience sing-a-longs or chanting.

Heavy metal in essence is about rebellion while carrying out your visions in grand style. Gloryful live for battles, fantasies, wielding their weapons of instrumentation to construct songs that transfer easily from the studio to the stage. Johnny la Bomba as lead singer has that natural charisma to launch ships or command attention atop a mountain – "The Glorriors" showcases his raspy to higher reaches through the verse and chorus transitions. Add in a solid cover that many will be proud to adorn (can never go wrong with swords and skulls, right?), and "End of the Night" keeps Gloryful on the right track in terms of execution and steadfast to where they should be as traditional purveyors.

WIRED ANXIETY – The Delirium of Negation