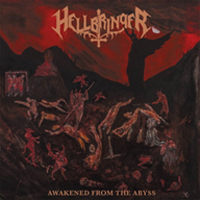 HELLBRINGER – Awakened from the Abyss

‘Awakened from The Abyss’ is second full length from Aussie thrashers Hellbringer. The main thing you need to know about this record is that it sounds uncannily like Slayer’s ‘Hell Awaits.’ I am sure there is no way that this is a mistake or something that happened unconsciously. If so, how could everything be so spot on, even down to the production? Fair enough, vocalist Luke Bennett, does not sound like Tom Araya, but there are tracks here that could easily have made it onto Slayer’s sophomore album without anyone noticing a thing. This is to Slayer as Gruesome is to Death.

Listeners are going to either have a problem with this or not. I don’t have any beef with it at all, as you could probably guess from the score above. I love early Slayer and have always bitterly rued the fact that they disappeared up their own backsides musically (the main culprit in my book being their incorporation of nu-metal style riffs). In a way, ‘Awakened from the Abyss’ sounds like something that could have been released between ‘Hell Awaits’ and ‘Reign in Blood’, so from where I stand, this is a very welcome addition to any respecting thrasher’s catalogue.

Of course, regardless of how it sounds or who it sounds like, an album has to be able to stand on its own two legs and ‘Awakened from the Abyss’ swaggers about in beer soaked denims. The musicianship is excellent in all areas, with each member putting in a seamless performance. Quite simply put, a band can’t sound this good without knowing what they are doing. Most importantly, the songs all manage to each hit the target, while functioning together as a satisfying whole entity.

HERETIC – Underdogs of the Underworld