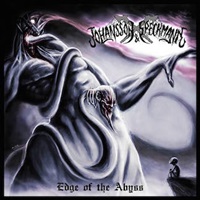 Free of physical locality restrictions to prohibit creative endeavors, international collaborations in the recording field appear to be a fairly regular occurrence in the metal realm these days. Home studios and computers make these records affordable and quicker to develop – as "Edge of the Abyss" is the third Johansson & Speckmann record in four years since forming in 2013. Rogga Johansson handles the guitar and bass duties – while Paul Speckmann is the vocalist, and they have Brynjar Helgetun rounding out on drums. All three musicians are seasoned players at the preferred style on display death metal – and that’s what you’ll get from these 9 songs.

Old school oriented Swede-death is what you’ll get throughout this 33-minute effort. Paul’s raspy, low growls fit perfectly with the evil mid-tempo to slightly faster riffing, as "The Last Witness Is Barely Live" plus "Perpetuate the Lie" recalls the jumpier aspects of Dismember careening against the Viking aspects of early Unleashed. Occasional spoken word parts or Machine Head-ish guitar squeals can give you a mood shift in the moment, but for the most part "Edge of the Abyss" is going to stick to trademark death metal – blast beats when necessary, groovy verses and focused riffing, plus a style that 25 plus years later still finds favor in the underground community.

Johansson & Speckmann aren’t out to revolutionize the genre – they know their comfort zones and spit out appropriate, direct material that doesn’t overstay its welcome. Paul’s rhythmic growl has that discernible quality that goes back to his Master starting period, having an influence on the pioneers of the genre. As long as you know going in that "Edge of the Abyss" stays the old school Swede-death course, you’ll walk away feeling satisfied.

HELLBRINGER – Awakened from the Abyss