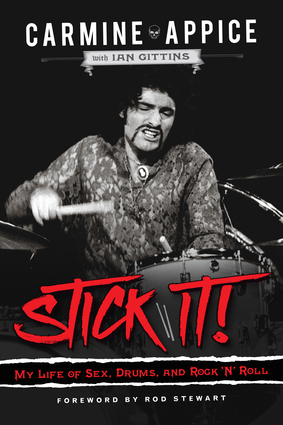 Carmine Appice is a legendary drummer. His impressive resume lists bands and artists such as the pioneering Vanilla Fudge, Cactus, Rod Stewart, Ozzy Osbourne, Blue Murder, and countless other outfits that would take up half a page just to name-drop. This brand new biography of his, appropriately entitled "Stick It! My Life of Sex, Drums and Rock ‘N’ Roll", is quite the story and chronicles his early years and Italian upbringing in Brooklyn as well as his entire musical career from start to finish and all of the debauchery, insanity, and rocky marriages that went with it. Granted, some bands and musical accomplishments take up way more space in the book than others, but that is perfectly natural as some of Appice’s musical endeavors didn’t exactly set the world on fire and are simply less interesting to discuss, which he is surprisingly frank about in the book. I found that sense of self-critique in terms of his work quite refreshing, actually. Anyway, this biography offers a fairly comprehensive view of everything that he has been through, both professionally and privately.

Now, the thing about this book is that it contains a lot of anecdotes and stories revolving around sex, which is hardly surprising when we are dealing with a man who has toured professionally ever since the 1960s, but this one is pretty fucking over the top in terms of sexual escapades involving groupies, strippers, girlfriends, horny female fans, and so on and so forth. In all honesty, it did become somewhat tiring after a while, and when he mentions encountering a "gorgeous chick with huge tits" or something along those lines for the 900th time, it’s just not fun or entertaining anymore. There are a lot of perverted, sleazy, and macho-like happenings detailed in the book, and Carmine even had a front row ticket to the infamous mud-shark incident involving members of the Led Zeppelin entourage, but, luckily, his biography contains way more than just sex and orgies and trashed hotel rooms. His career in music is fascinating and intriguing in and of itself, and it is both thought-provoking and interesting to read about his work with legends such as Jeff Beck and Ozzy Osbourne as well as the birth and rise of Vanilla Fudge, to name but a few examples. Best of all is the first part of the book, the one where we learn what it was like growing up in New York back in the 50s and 60s and how he encountered the mob, what the music scene was like, how and why he ended up playing drums, teenage rebellion, chasing girls, cruising with the local gang, and life at home with the family. Also, there is something heartfelt and warm about the way in which he relates how he befriended Jimi Hendrix and how devastating it was to lose him. It was also cool to read the last few chapters in which Appice looks back on his many adventures and how they changed him, how he now looks back and feels like a changed man in many respects. There are, as you have probably guessed, countless funny stories throughout that will make you laugh, but some serious and grave ones as well. And then there is all the sexual stuff, which I am pretty sure some will be disgusted and revolted by while others will merely shrug and say that that was what being a rock star in the 60s, 70s, and 80s entailed.

I definitely had fun reading "Stick It! My Life of Sex, Drums and Rock ‘N’ Roll", and despite it being somewhat uneven due to the repetitive sexual stuff and all the celebrity name-dropping, I found it engaging and uplifting. The thing is, Carmine Appice paved the way for many hard rock and heavy metal drummers, and he was a pioneer. In that sense, I am glad that he finally has a biography out. His story deserves to be read and heard.