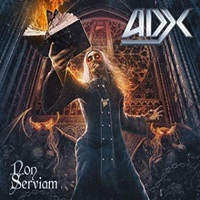 French speed/ heavy metal band ADX has been together since 1982 – gaining a cult allegiance due to their quality riffing and melodic vocals while sticking to their native French tongue for the lyrics. The tenth studio record "Non Serviam" contains 11 tracks of guitar-based harmonies, double bass oriented tempos, and a lot of marching/heads down riffing that is in the caliber of Heathen and early Metallica.

Phil Grélaud’s accented mannerisms may take a little getting used to, but there’s no denying the man has a set of potent pipes vocally (check out "La Complainte du demeter" for all facets). The dual axe abilities from Pascal Betov and Nicklaus Bergen push ADX to upper tier membership – fluid, thoughtful, and properly accentuating the right hooks by doubling up or echoing the overall theme of a particular song. Power riffing and classic, melodic runs give the title cut and "Cosaques" a lot of 80’s Iron Maiden textures, the type of songs that raise fists and cajole screams.

It’s easily understood why ADX is one of the favorite French bands in their particular speed/heavy metal niche. For those willing to expand horizons beyond English-sung acts, "Non Serviam" can provide a boatload of engaging material and entertainment. The cannon blast snare/double bass work from Didier Bouchard is like icing on top of an irresistible meal – time for me to reach out and seek out a lot of this back catalog.