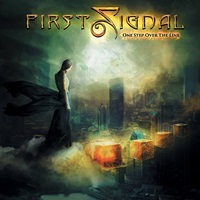 FIRST SIGNAL – One Step Over the Line

Six years removed from the self-titled debut, First Signal is a project that allows singer/ songwriter Harry Hess to stretch more of his melodic rock/AOR wings. Teaming up this time with Michael Palace and Daniel Flores on the instrument front, and a host of other vocalists for background supplementation, "One Step Over the Line" is another shimmering outing that proves the sub-genre still has vitality in 2016, even if the 80’s heydays are long gone.

Smartly placed keyboards and guitar layers allow the musical hooks to hit early and often – "Love Run Free" pulsates in that older House of Lords vein, while "Minute of Your Time" has that fighter soundtrack meets Bad English quality, featuring a melodic lead break that propels from the main hook. Harry’s voice hasn’t lost one iota of compassion, power, and projection – equally adept at the up tempo material as he is on the sensitive ballad work, of which "Weigh Me In" and "Still Pretending" would be top 10 staples if corporate radio would loosen the reigns and push real music today. These records prove that the energy and legacy established by artists like Journey, Foreigner, and Survivor will not die – as musicians who have proper intent can deliver if pushing their creative ability to the maximum level as Harry, Michael, and Daniel do on here.

Given Harry’s work in Harem Scarem plus Daniel’s busy schedule in his own bands as well as behind the boards as a producer, we may not get a fairly regular release schedule from First Signal as you may from their main groups. "One Step Over the Line" will hit many AOR/ melodic rock top lists for 2016, and that should satisfy the troops as well as justify a third album to come down the pipeline.