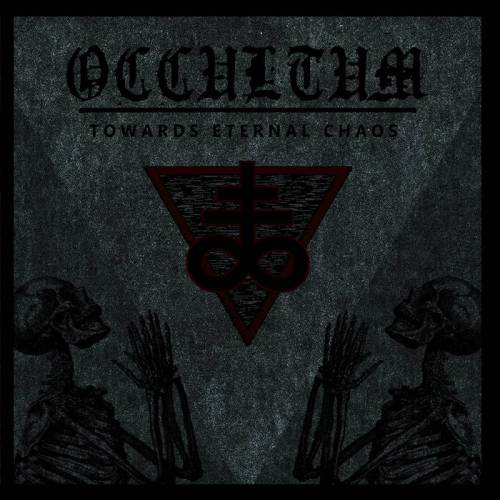 The Polish entity Occultum vomits forth ugly, grim, and bitter black metal on «Towards Eternal Chaos», and I must say that they do so rather convincingly. While the music is firmly rooted in traditional black metal, which is to say raw and intense black metal in a sense, the band has managed to create an album that is more than just a run-of-the-mill affair. Granted, Occultum brings nothing new to the table as such, but somehow these guys have managed to make their hateful and vile brand of black metal more interesting than many other bands out there. For one thing, the musicianship is strong, so no complaints there. However, the major strength of the band lies in the riffs and melodies that these fuckers have spawned. They are catchy and memorable, but utterly dark and sinister as well. Nothing overly complicated or technical, just straight-up jackhammer-riffs that will tear you a new asshole. In addition, the vocals are quite diverse while the arrangements are nicely twisted in places, so the album is not as one-dimensional as one might be led to believe when hearing the phrase «traditional black metal». Occultum brings to mind bands such as Gorgoroth, Marduk, Tortorum, MGLA, and even a few old-school Swedish death metal bands in places, but the band is no mere copycat. Check "Towards Eternal Chaos" out if you are in the mood for satanic and well-played black metal, especially the excellent track entitled "Abomination".