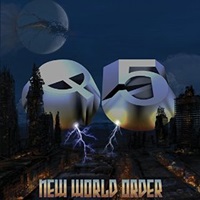 Washington act Q5 contained guitarist Floyd Rose, most famous for inventing his namesake tremolo that prevents guitars from going out of tune during its use- releasing two albums in the 1980’s, of which "Steel the Light" resonates with a lot of classic metal fans today. The reformation today includes three original members (guitarist Rick Pierce, bassist Evan Sheeley, and vocalist Johnathan Scott K), along with new recruits Dennis Turner on guitar and Jeffrey McCormack on drums. "New World Order" is the first Q5 studio album in 30 years – packed with 14 tracks and well over 66 minutes of music.

The band has a bluesy feel right from the start on opener "We Came Here to Rock" – Johnathan’s nasally Bon Scott-oriented nature giving the mid-tempo anthem a Y&T meets Helix feel. The twin guitar lines come out on the charging "One Night in Hellas", but by song three the quality seems to dissipate as the quintet appear stuck in low gear when it comes to the riffing and tempos – there’s little in the way of energy to propel "The Right Way" or "Halfway to Hell" into continuous playbacks. Don’t get me wrong, the occasional riff piqued interest here and there, bringing me back to Judas Priest for the epic "A Prisoner of Mind" or classic Saxon on "Fear Is the Killer" – but for the most part, the hooks and overall songwriting lacks that extra special bite that makes you come back for more. A lot of the choruses have a simplistic, predictable pattern that just repeats a short phrase over and over again where I believe Q5 could have challenged themselves to break away from the mold.

"New World Order" proves the musicianship and skill sets are still solid – now it’s a question of digging deeper in the creative department and setting sights on developing a record that elevates Q5 as relevant today, not coasting on past accomplishments.

FIRST SIGNAL – One Step Over the Line