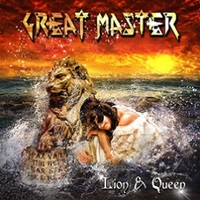 From their 1993 beginnings Italian power metal act Great Master released two demos before 10 years of inactivity took place, as other musical projects became a priority. Active again in 2008, the band has since signed with a record label and released two full-length albums plus participated in a Heavy Load tribute album. Now that everyone is up to speed, let’s look at "Lion & Queen", the new record – a heads down power effort full of passionate melodies, cultural/ large than life musical hooks and a boatload of choir-like choruses.

German meets Italian power seems to be the musical foundation for songs like "Another Story" and "Time After Time", where acts like Blind Guardian, Running Wild, and Domine come to mind. Max Bastasi as a singer has one of those semi-operatic, seasoned deliveries that champion warriors from mountain tops and can convey storylines convincingly. Layers of guitar harmonies and vocal melodies carry a lot of the hook-load for these arrangements, allowing your ears to catch onto a number of elements – the best cuts including the cultural themes throughout the battle ready "Traveller of Time" and the eleven-minute mystifying "Mystic River", where Shuai Xia and Jahn Carlini trade off explosive axe breaks in an effort that would make Gamma Ray fanatics proud.

Originality in the power genre is hard to come by- let’s face it, given the fact that we have had 30 plus years of bands performing in this style, it’s not easy to develop an original take on the scene. Great Master prefer to play within the parameters they feel comfortable in, and give the listener a variety of harmony/ melody passages to latch onto, scream in unison with, and ultimately appease all fantasy/ history buffs in terms of the lyrical concepts. "Lion & Queen" will not disappoint most power metal lords and maidens – that’s all you can really ask for, right?