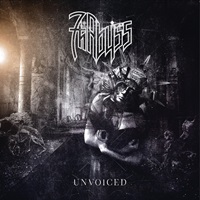 Extending and melting sub-genres of metal together, Bavaria’s 7th Abyss prefer to serve up an explosive cocktail of groovy melodic death with occasional crossover/hardcore nuances on this debut full-length "Unvoiced". Shifting from straight forward parts to obvious breakdown elements, musically there’s a lot to love about the riffing and varied drum approaches often part to part within "Lost Eternity" or the humorously titled "Don’t Take Blowjobs from the Prime Time Whore". It’s as if the band has taken in a lot of European melodic death metal along with peering into the American modern scene, fusing together a best of In Flames meets Trivium cocktail.

Tapping action punctuates a lot of the melodies to "Deaf" or the instrumental sections for "Memories of Lies", but the actual lead work from Robert Klein contains a lot of forethought and all-encompassing feel to the choice of notes, be they slow and steady or fiery with shredding chops. Andreas Müller as a vocalist has this weird bellow to his deeper, throaty delivery – and when he chooses to up the intensity he definitely comes off more in the Biohazard/ Hatebreed mold. A lot of times his pure singing (cue the chorus to "Lost Eternity") has that nails on the chalkboard awkwardness, where possibly gaining more coaching or totally abandoning those parts may be the course of action to take on future recordings.

7th Abyss sonically give the listener a lot of ideas to latch onto at a variety of mid-tempo to slight faster paces. And for the most part, "Unvoiced" keeps interest because the main hook choices build in such a way that you want to hear what happens next – from the speedy barnburner "Despaired" to the melodic death closer "Schwester Rabiata" with the Machine Head-like slam/squeal time change. Let’s just hope that the vocals gain a bit more strength to keep up with the obviously potent music the quintet present.