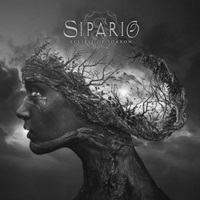 My first time taking in this Italian symphonic power metal band, Sipario have been together since 2007 and released an EP plus debut album in that next six years, dealing with a few lineup shuffles along the way as to be expected in establishing themselves. "Eclipse of Sorrow" is the second album, a 13 track odyssey into waters very familiar to those who like the medieval dark chord progressions that put Kamelot on the map, along with a female vocalist in Mæg Raheena that has a lot of Epica/ Nightwish strains.

Gravitating between more melodic fare such as "Celestial Karma" to the heavier strains of "Revolution", you’ll also get the tender ballad half way through in "Dandelions Night". Occasionally leaning into modern strains with some of the hooks or guitar parts (the instrumental section of "Icarus Symphony" and "The Purge" most notably) pushed Sipario into rarified company – they manage to assemble this aspect smoothly into the symphonic power metal template without sounding crass or blatantly obvious. When guitarist Valerio Specchio choses to unfurl cultural aspects to his playing, the results can truly be breathtaking – "Insurgency" one of the more moving numbers towards the second half of the record. Keyboardist/ pianist Daniele Tari doesn’t overwhelm the listener – keeping his parts tasteful and unified, also adding a growling male contrast in some of the heavier material.

Add in a sci-fi conceptual story developed out of the minds of Daniele and Valerio and you have the makings of a record that rivets the headspace from first note to last – never overstaying it’s 54-minute timeframe. Those who miss Kamelot during the "Epica"/ "Karma" years with a flourish of symphonic metal strains should gravitate easily to Sipario’s musical outlook and execution.

AFTER ALL – Waves of Annihilation