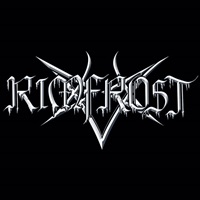 Rimfrost is a Swedish black metal band from Hagfors. Their new album is the 3rd album they have released and the first one on Non Serviam Records.

The album opens up nicely with As the Silver Curtain Closes. A track that in many ways reminds of Immortal’s "All Shall Fall". The ending of the song is a little weirdly paced, but the song is over all an ok way to kick off the album. Not the best opening ever, but as long as you feel invited to stay, then this is a good track.

Saga North is the second song, and it gives a very special, yet powerful vibe to the album. Fast guitars that can remind somewhat of power metal riffs change over to the more atmospheric style of black metal before turning a bit thrashy. This is a great example of how music should be. Not afraid of exploring itself. The atmospheric sections in this song is just amazing. They bring alot of life to the image painted by the rough vocals and the straight forward melodies.

Onwards to Beyond the Mountains of Rime. Probably one of the coolest tracks on this album. Mostly because of the rythm that isn’t too "in your face". The song is a good example of old- and new school, mixed together. Mountains of Rime is definetly one of the more memorable tracks of any band so far this year. Only issue is that it is a bit too short.

Dark Prophecies opens up nice and melodic, but it lacks the escalation that it should have. Compared to the rest of the album, this feels a little like it is stumbling from one part to the next instead of gliding smoothly. That being said, the melody carries the song nicely and the song sticks the landing ok.

The song with the least interesting title is obviously Ragnarök. There are quite possibly less bands that don’t have a song with that name nowadays. This one however, kicks the asses of most of the others. Lively, and yet still relaxing to listen to, this song is the one that should have opened the album, since it gives the listener alot to work with and alot to digest. "Ragnarök" is a big song and it is a good service to the listener. Alot of elements put into six minutes.

Cold Reminds alot of the Immortal stuff that the opening track does. The way this song is built up reminds of a more thrashy Abbath. There are some chorus in the background, but they don’t really drive the song in any direction. This is the shortest track on the album and with good reason. There wouldn’t be much to base it on after the four minutes that it fills.

Witches Hammer pulls the whole thing more in a Carach Angren way. Not musically, but rather the way the vocals are layed down. This is a nice experience, and the somg also knows to have fun with it’s melodies and rythms. The synth lifts the song up to a higher level and the whole thing becomes very epic. Sadly, the band changes the pace a little after the halfway mark of the song and it wrecks the whole build up that the song has established. It gets way too thrashy near the end and the song ends up as wasted potential.

Frostlaid Skies lasts for almost ten minutes and it should therefore know how to take it’s time and do a great build up, since it is the "grand finale". The suspension is kept somewhat, but it slips a little at moments. If the band had maybe stayed away from the double bass for the first three minutes, it might have worked a little better. This song does have the problem with being a bit too thrashy, but unlike Witches Hammer, this track goes the other way around and serves an amazingly epic part around the middle of the song. It ends on a somewhat melodic note, with the raw vocals giving the echoing feeling of the mountain side. Probably the best ending that this album could get. The last 30 seconds or so of the song feels a little out of place, and the song would have been better off without it, since it seems alot like a production error.

All in all, the album is ok. You won’t be bored if you listen to it, but you will probably not get the sensation of a lifetime from it either. The production is ok, but the writing seems a little off at some points. However, if you do check it out, you will probably not regret spending your time with it.