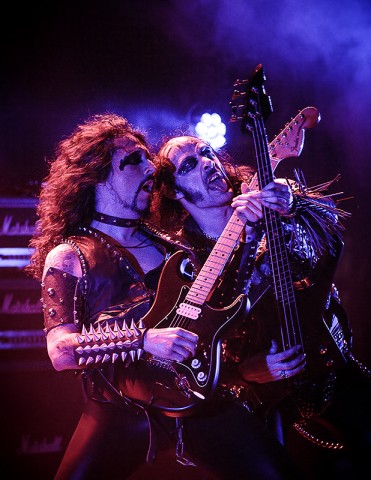 Nordjevel started off the last day and immediately gave a nice signal that the last evening would be a grand gesture of black metal. Nice combinations of raw black metal and a more melodic tone is why this band has already become one of the defining bands of today’s black metal. Their audience loved it and the band had a very good vibe on stage. This is a nice continuation of Norwegian and Swedish black metal. Nordjevel truly proved themself to be worthy of their genre. Young minds are so badly needed in the genre, and this band provides that. Black Metal seen in new eyes.

Order is a colaborative band with members like Manheim, Messiah and Anders Odden. And here is all you need to know: In Norway there is a saying that goes "De gamle er eldst", which basically means that the older generation is still the one that controls the show and that they knows best how to do things. Order is truly a proof that this saying is as relevant as ever. Rarely does a band demonstrate pure power in such a delicate way. Maybe a bit calmer musically than alot of the newer bands and they didn’t wear any nails or spikes or collars, and they didn’t have any props (except for a book). This was all this band needed to prove that they were head(s) and shoulders above alot of todays bands. Atmospheric and oldschool musically, these guys came to show Inferno how it’s done!

The best way to describe Nifelheim is this: Imagine for a second that Judas Priest played black metal instead. Nifelheim is always a good time and they are always a ton of fun to see live. Far from the greatest tome in music, but they just give their audience such a good time, and Inferno was no exception to that. They came to chew bubblegum and kick ass, and they were all out of bubblegum. If you ever want to go to a black metal concert where you don’t have to be too concerned with the music, but you want to have fun, well, then Nifelheim is the perfect band for you.

Månegarm from Sweden gave a strong performance of the evening with some classics involved in their setlist. They had a good audience and they gave their best possible performance. Being a viking/folk metal band, there were alot of good moods in the audience and the energy was fun and great. Great way to relax during a festival.

And then there were Mayhem. What words can be used about this performence other than legendary? Opening up with Maniac on vocals, doing stuff from the "Grand Declaration of War" album was such an amazing thing and it showed quite early on that the audience were in for an interesting ride. After about five songs, the backdrop gets switched and Attila enters the stage. Sadly for the show’s part, he is rather less interesting to watch these days, so the concert took a grim turn into the realm of the less endearing. If nothing else, his appearance was rather short, and he did an ok job with Freezing Moon (just like everyone knew he would). After about four songs with Attila, the backdrop changed again as Silvester Anfang plays in the background. Maniac returns to the stage and everyone knows what’s about to come. Songs from Deathcrush! After the song of the same name, Maniac announces that Hellhammer will be leaving the stage to give room for Manheim to play drums on the song Chainsaw Gutsfuck. And even though this was an amazing part of the show, Mayhem had more surprises for their fans. Messiah also joined in for the two last songs of the concert, Carnage and Pure Fucking Armageddon. The only way Mayhem could have given more to their core fans would have been if they somehow were able to wake Dead and Euronymous up from the dead.

The deal about Mayhem is that they may not always be the best band musically, but if there are anyone that knows what Black Metal is about, it’s these guys. They have the extreme look on stage (Attila anyway), and they have authentic props and a real feel to what they are doing. This show was a nice proof of that, even if it was somewhat short. Mayhem delivered everything and more!