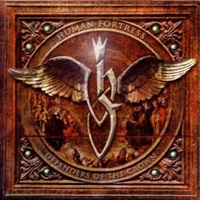 Rare is the day that you have an original label re-release an album and have the band record two exclusive demo tracks with their previous vocalist – but that’s what we have here on "Defenders of the Crown". Hitting the streets for the first time in 2003, this German power metal band had a strong anthem-oriented sound with mid-paced battle themes, requisite twin harmony guitar moments, and a vocalist in Jioti Parcharidis that tailored the warrior/ fantasy-oriented lyrics to fit in multi-octave paces.

A sextet during this time period, keyboardist Dirk Marquardt set up during "Collosseum" leads perfectly into the double bass / gallop-ish "Gladiator of Rome" follow up, something that melds together the best of Iron Maiden and Virgin Steele in terms of riffing and melodies. Guitarists Todd Wolf and Volker Trost are very capable of penetrating the aural waves through their energetic rhythm and lead work – making tracks like "Holy Grail Mine" and the decidedly Teutonic "Skin & Feather" two highlights. Jioti has one of the best voices for that classic power sound – majestic and gritty all the same, those who love Ronnie James Dio and David DeFeis will find much to love about his exemplary abilities during all of these songs – standouts for me including "Sacral Fire" and the straight ahead opener "Knights in Shining Armour".

Bonus tracks include two demo cuts from their early days never appearing ever on the market until now – "Human Fortress" and "We Are Legion". Beyond including Jioti on vocals, current Human Fortress members on keyboards and bass (Dirk Liehm and André Holt respectively) put their touch on these songs. Very much in line with the content of the record, understand that the production quality is bare bones in comparison to the regular album.

Overall a great reminder of where Human Fortress has come from, "Defenders of the Crown" possesses the right style and execution for the iron-clad warriors in need of the right charge to set the night on fire.

PEO – Welcome to the Party