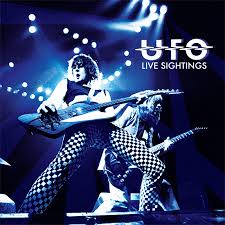 UFO is a legendary band that was truly groundbreaking and innovative back in the day. I think most of us can agree on that. The band has existed ever since 1969 and simply kept going over the years with various different line-up while releasing albums on a more or less regular basis. We owe bona-fide classic cuts such as «Doctor Doctor», «Lights Out», and «Too Hot to Handle» to these guys. They can fucking play, alright?

In a way, it pains me to say that this 4-CD release entitled «Live Sightings» is just not that interesting. I do not blame that on the band, but rather on the sound quality or lack thereof. This box set consists of four different live shows that were taped (or bootlegged?) in the US in 1980, 1981, and 1982. The cool thing about this is that it features lead guitarist Paul Chapman and a somewhat underrated era of the band’s history, but that is about it, really. The setlists do not differ radically from each other, which entails that many of the same tracks appear across all four discs. As I pointed out before, the sound quality leaves a lot to be desired, and these recordings simply lack the spark, the energy, and the intensity that I normally associate with a UFO live show. The sound ranges from distorted to muddy and further on to strangely muffled. Fans of UFO will most likely find something of value and interest here, but for the more casual fan this is hardly the place to invest your time and hard-earned dough. This is a real letdown. Pure and simple. Listening to live renditions of songs such as «The Wild, the Willing and the Innocent» and «We Belong to the Night» ought to be better and more captivating than this.

Before I forget, there is supposed to be a special bonus live LP from 1972 of the only known recordings of guitarist Larry Wallis (Pink Fairies, Motorhead) included, but I only received digital promo versions of the four CDs, so I cannot comment on the LP.