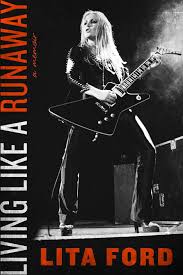 Legendary guitarist Lita Ford’s long-awaited autobiography entitled «Living Like a Runaway: A Memoir», is quite the controversial and captivating book, to put it mildly. If you have been following the heavy metal tabloids lately, you will no doubt have picked up on some of the debate and controversy that this memoir has sparked. I will revert to this later on, but let me tell you this; «Living Like a Runaway» contains some explosive and highly interesting stories and anecdotes that are bound to either provoke or enthrall its readers. I certainly had trouble putting this one down and more or less read it in one sitting.

Apart from the fact that it is well written and cohesive, I simply love the pace of the book. It is nearly impossible to put down once you have started reading it, which is definitely a big compliment. While one could argue that Ford ought to have described certain things in more detail or elaborated on how particular encounters with other musicians, record producers, managers, lovers, husbands, and friends affected her, one should keep in mind that she has been playing and performing music for five decades and that she was born back in the 50s. Cramming all of that into 272 pages is no mean feat. It goes without saying that a few chapters and paragraphs feel a little rushed and borderline superficial. On the other hand, Ford has lived a fascinating life and this memoir of hers is rich on stories relating to both her life in the spotlight as well as her private life. Lots of debauchery, alcohol, drugs, one-night stands, fights, tumultuous recording sessions, personal loss, misogyny, failures, tragedies, and triumphs. This book contains all of that and more. Her marriages and other personal relations are also touched on with the most heartwarming recollections of hers being those revolving around her parents.

Although I hardly consider myself a fan of the Runaways, which was masterminded and conceived by the notorious Kim Fowley (R.I.P.), it is very interesting to learn how that band operated and functioned back in the late 70s not to mention how it was initially put together. Those first few chapters are definitely some of the best, not only with respect to what the Runaways achieved while they were together, but also in terms of how the music scene and milieu was back then. The stories relating to her stay in London back in 1978 while still a member of the aforementioned band and her socializing with Sid Vicious and Nancy are some of the highlights of this book.

Going back to what I mentioned earlier on about this book having sparked a lot of controversy lately, there are some rather serious…how shall I put it…claims in this book that are pretty damn unsettling and tragic. I am not saying that Ford is lying, but the boundaries between what is right and wrong, or true and untrue, if you will, often become somewhat blurry whenever people choose to chronicle events and happenings in their autobiographies while relying on their own memory. Take J. Edgar Hoover’s memoir, for instance. Luckily, it is neither my job nor my task to comment on the veracity of certain events and characters depicted in this book. I think each reader should make up his or her own mind, but, regardless, «Living Like a Runaway» is most definitely a thought-provoking and fascinating read. Her constant battles and confrontations with the male-dominated hard rock and heavy metal scene are both inspiring and devastating to read. No doubt, Ford has worked extremely hard to achieve success, but, having said that, «Living Like a Runaway» also portrays her as a woman with a take-no-prisoners and no-non-sense approach to things. She comes off as downright aggressive in places, which stands in stark contrast to how she describes and sums up her interactions with her own family and close friends. Then again, some human beings are simply complicated and complex. Perhaps that pertains to Ford? Who knows?

In summing up, «Living Like a Runaway» is a compelling, intense, and riveting memoir with a lot of qualities to it. I found it refreshing to read an autobiography from a woman’s point of view, and, regardless of whether one likes Ford’s music or not, it is admirable that she defied all those who said that she would never succeed in a largely masculine and male-dominated culture such as hard rock/heavy metal and eventually proved them all wrong.