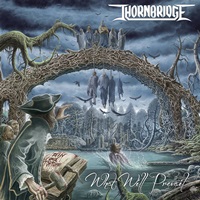 Forming in 2008, these German power metal musicians established a slow and steady approach to their output, releasing their "Gallery of Horror" self-produced EP in 2012 before gaining the interest of Massacre Records and finally issuing this debut full-length. Aiming to bring back a lot of the good old days of this sub-genre in terms of a more primitive, riff-based outlook where the harmonies appear more organically – many will think of the early days of Helloween, Gamma Ray, and even a bit of Rage/ Grave Digger throughout this 10 song effort.

Hymn-like choirs appear immediately on "Blow Up the Gates of Hell" while a mid-tempo guitar hook echoes throughout the arrangement, much like "I Want Out" period Helloween, although the lead break has a lot more restraint in accenting the riffing at hand. The drumming at times can be too robotic, especially when turning on the double bass for "The Dragon’s Reborn" – the arrangement probably saved by the chorus choirs that possess a lot of Orden Ogan charm (not surprising considering Seeb Levermann from the band produced and mixed this record). Lyrically covering fantasy, secret worlds, and mystical subject matter, Thornbridge aren’t going to exactly forge new territory – they are content to mix a lot of their late 80’s/ early 90’s affinity for Teutonic power metal and perform new songs for their generation of followers to savor.

Overall, the mirroring becomes a little too close for comfort in a Helloween meets Hammerfall way for "Coachman’s Curse", especially as Patrick Rogalski and vocalist Jörg Naneder push the happy twin break maneuvers to raiding the Hansen/Weikath catalog for their favorite runs. When looking at the main singing of Naneder, his mid-range nuances are satisfying, but nothing noteworthy – as a guest appearance from Philip Schunke of Van Canto on "Eternal Life" elevates the proceedings because of his upper register presence.

Indiscriminate power fiends may love "What Will Prevail", but overall this doesn’t stick to the ribs like the old guard, and if they hope to make that leap there needs to be a lot more original thoughts and ideas executed to get there.