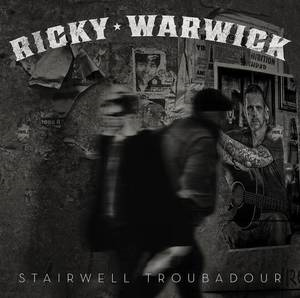 Ricky Warwick (Black Star Riders, Thin Lizzy, The Almighty) has to be one of the most active, awesome, and disciplined musicians out there today. Apart from the 2-CD set entitled "When Patsy Cline Was Crazy (and Guy Mitchell Sang the Blues)/Hearts on Trees" that was recently re-released by Nuclear Blast, Warwick released this rather excellent and eclectic covers album consisting of ten songs not that long ago via PledgeMusic. In a way, this album came about because of public demand, but you can read more about that on Ricky’s PledgeMusic page. On to the album, then.

"Stairwell Troubadour" is without a shadow of doubt one of the best covers albums that I have ever had the pleasure of listening to. The way in which Warwick has interpreted these tunes and run them through that peculiar machinery of his is mind-blowing. Musically and lyrically, he covers a lot of ground in that pop tunes by Dead or Alive ("You Spin Me Right Round") and Britney Spears ("Oops!…I Did It Again") as well as old pioneering rock ‘n’ roll songs by Eddie Cochran ("Summertime Blues") and Elvis Presley ("Burning Love") are interpreted. Let us not forget the brilliant version of the classic Iron Maiden anthem "Wrathchild". These versions by Ricky are simply phenomenal. The album is largely acoustic, but do not for one lame second think that the album is not energetic and passionate, because it most certainly is.

Instead of being a dick and staring at this review, head on over to Ricky’s PledgeMusic profile and support the great man. He truly deserves it.