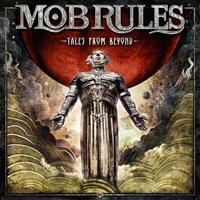 There’s something to be said for a band willing to spread itself out amidst a particular genre. Germany’s Mob Rules in their melodic metal framework have through the years developed songs that can be dramatic, emotional, energetic, power-oriented, progressive, or more straightforward in their metal stance. "Tales from Beyond" is their 8th studio album, and although it may seem like it’s been a while since their 2012 effort "Cannibal Nation" the band did re-recording some classics and put new material on their 20th anniversary box set "Timekeeper" that appeared in the fall of 2014.

What is most enjoyable regarding Mob Rules is the attention placed upon creating a driving mood musically- and enhancing this with the proper dynamic nuances and vocal melodies over the top. At certain spots more like the early-90’s Savatage period for "Signs", at other times a little more late-80’s Iron Maiden in the clean to power chord choices for the outstanding epic "Dykemaster’s Tale" – overall the sextet just exudes proper confidence in the flow of parts and understanding how to take the listeners on a journey, singing or tapping in unison to the proceedings pouring out. The guitar breaks for "On the Edge" and the double bass-fueled "Dust of Vengeance" are perfect examples of running a consistent theme that aligns with the song, not just throwing down thousands of notes in an eight-bar measure for the sake of showing off.

The title track trilogy – a storyline based on the book "The Martian" about an astronaut being stranded on Mars and how he handles survival alone – gives us incredible atmosphere, engaging guitar/keyboard set ups, plus some of vocalist Klaus Dirks best work. The way the band is able to incorporate distant galaxy voices on "Part One- Through the Eyes of the Storm" that roll into some of the cleaner acoustics and evil keyboard tones that set up "Part Two- A Mirror Inside" really makes you feel as if you are experiencing the despair and inner turmoil the astronaut is facing during the narrative.

"Tales from Beyond" keeps Mob Rules creative abilities and execution at the higher tiers of the genre – hopefully increasing their following. For those who love intelligent music and engaging riffs/hooks in their melodic metal, it’s outstanding work.