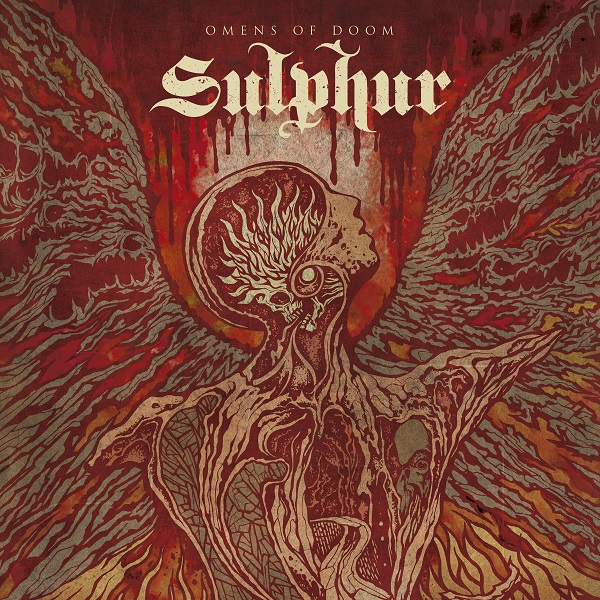 The experimental Norwegian quintet that is Sulphur has kept me waiting for a long fucking time for this follow-up to their excellent second album entitled «Thorns in Existence» (2009). This massive 7-song slab of somewhat psychedelic, morbid, and dynamic (black/death) metal, simply entitled «Omens of Doom», has been worth the wait. Not that I would deem it better or more interesting than the band’s second album for reasons that I will get back to later on, but this brand spanking new freakshow is just as impressive in its own twisted way.

The mellow and moody melodies that constitute the beginning of the opening track «The Force of Our Fall» hint at what is to come, namely strange and otherworldly music that keeps shifting between aggressive outburts and parts that are both calm and unsettling. The album as a whole has a sense of the carnivalesque and surreal to it, but contrary to many other avantgarde bands and artists Sulphur never turns into one of those geeky crap-hole bands that is merely out to impress you with its technical skills. Sulphur is all about the song as well as writing actual songs as opposed to merely assembling tracks, if that makes sense.

The majority of songs on «Omens of Doom» are catchy and memorable and yet sufficiently challenging; one can listen to them many times over without getting bored. While «Thorns in Existence» was perhaps a bit more intense and adventurous in my opinion, «Omens of Doom» is more focused and epic. For that reason, I think those two albums complement each other well, but at the same time it is impossible for me to say which one I prefer. Simply put, both are excellent releases.

«Omens of Doom» oozes darkness and is both captivating and delightfully unsettled. The production fits the material nicely and is neither too clean and sterile nor too murky and raw. The musicianship is excellent and all the Sulphur trademarks and subtle nuances are there, so nothing is missing as such. The vocals are varied and diverse as well, which is important when spawning this type of music. One other thing that ought to be mentioned is that the lead guitar parts/solos are incredibly well-executed and memorable. You can actually hum along to most of them. «The Devil’s Pyre», «Plague and Pestilence», and the closing track named «Alt Svartner» are probably my favorite tunes off this album, but, as I mentioned earlier on, pretty much every song is interesting, so check this one out once you get the chance. And before I forget; the cover art is great too.