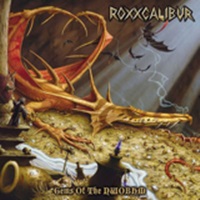 Back again for their third go around, these German musicians pay tribute to the New Wave of British Heavy Metal movement like no other. Roxxcalibur are seasoned musicians with ties to original acts like Viron, Abandoned, and Manilla Road among others – who deeply study and research the late 70’s to mid-1980’s bands that performed in this movement that really pushed the underground movement at a time when singles, flyers, tape trading, and self-promotion were often the only means to get the music out there beyond specialty radio programs, fanzines, or live performances.

This time we get 14 bands and 70 minutes of music – ranging from relatively well known acts like Trespass with "Stormchild" and Budgie for "Panzer Division Destroyed" to acts that may have only been known for a single album or even particular single/demo release such as Split Beaver in "Hounds of Hell" and Bashful Alley with "Running Blind". Keeping the songs in line with the early recording and production values, you will not get punch in computer enhancement or triggered tones that sound enhanced – Roxxcalibur prefer to let the music and their performances rest on their shoulders, not be note perfect as to lose the human aspect of what heavy metal should be about.

It’s hard to pinpoint favorites as they change through every pass. The up-tempo charge of Virtue’s "Fool’s Gold" gives off a lot of Riot meets Iron Maiden power, even when the riff/signature change takes place in the last third of the song. "Midnight Chaser" originally done by White Spirit has a lot of that primal guitar anthem angst and high soaring note propensities that those into Judas Priest live for, another song perfect for fast highway travel. And then there’s the drum/bass groove that sets up "Rip Off" from Smokin’ Roadie, another anthem to raise fists or beers for.

Purchasing the physical album you’ll get massive background stories from the band members themselves involved in the original recordings- the cover art alone worth the price of admission as it’s not a computer graphic image. "Gems of the NWOBHM" proves the genre will never die, and gives historical context to hopefully inspire new musicians.

ALAN BYRNE – Beat of the Drum