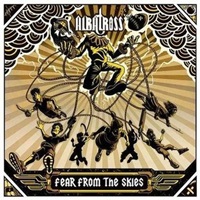 ALBATROSS – Fear from the Skies

Proving metal’s far reaching appeal, we have a traditional heavy metal group with avant-garde tendencies in India’s Albatross for their debut full-length "Fear from the Skies". Marrying a love of literature and metal since 2008, the sextet contains a triple axe attack that allows for a bevy of twin harmonies and solid rhythm riff antics.

Right out of the gate the carnival nature of the progressive guitar riffs and equally intriguing odd vocal melodies for "The Raptorsville Fair" made me think of Iron Maiden meets Psychotic Waltz, while the bass play adds a lot of Primus pop to the proceedings. The follow up "Jugglehead the Clown" has a thick rhythm attack that evokes Iced Earth, while once again the vocals from Biprorshee Das are unique, twisted, and unconventional – featuring a lot of up and down register work and personal inflections that just have to be taken in to be believed. I am sure he’s studied a lot of different metal and rock singers such as Mike Patton and King Diamond – although in the latter case, he doesn’t try the operatic element as much as the horror side through his inflection.

Keeping the record at a reasonable 38 minutes allows the listener to absorb the songs at a reasonable pace – as there is a lot going on in terms of song construction, melodies, riffs, and impressive lead break action that also can galvanize the legions. "A Tale of Two Tyrants" features a boatload of guitar hero-esque fluid parts and a doomy ending, definitely putting Albatross ahead of the pack. The throw back cover isn’t what one would expect either – upping the curiosity factor for the group.

In the end, a lot of people who are staunch traditional or NWOBHM fans with occasional Iced Earth nuances will love Albatross.

LETHAL STEEL – Legion of the Night