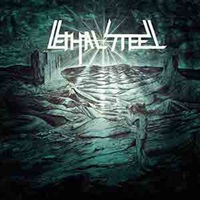 LETHAL STEEL – Legion of the Night

Straight ahead heavy metal has not lost any of its appeal in the current scene – as younger musicians willingly brandish their instruments of choices, don their belts, chains, and leather and stride gallantly into the path that started with Judas Priest, Iron Maiden, Accept, and Rainbow and morphed into a global phenomenon. Sweden’s Lethal Steel have been a five-piece outfit showcasing their love for the genre since 2011, releasing a 4 song demo tape the following year before gaining the attention of High Roller Records and issuing this 8 song debut album.

Expect a lot of galloping riffs, mid-range to slightly higher melodic vocals, and tempos that just scream old school heavy metal. The lead breaks from Jonathan N. and Johan Frick have this cultural, bluesy backbone, as if they’ve studied a lot of Smith/Murray and Downing/Tipton work – check out "Nattsvart" and the heads down anthem "Noctunral Seductress" in this department. Enforcer’s Olof Wikstrand helped the band in the recording and mixing arena, giving Lethal Steel a primitive, analog feel and vibrant tones that raise the hair on the back of your neck.

Vocalist Viktor Gustafsson has a little bit of a Paul Stanley inflection going on while sustaining a lot of his ending notes in a commanding, confident way for tracks like "Demon from the Past" and the guitar-harmony fueled opener "Sirius". When taking in "Legion of the Night" as a whole, it’s easy to think that this album could have easily come out in 1983 as it does in 2016 – brimming with ripping chord progressions, pumping bass lines, proper twin guitar melodic elements, and guaranteed to set you on the path to power and glory.

Chances are if you love the new breed of Enforcer, Stallion, and Striker – put through more of an 80’s Swedish blender – Lethal Steel will up your irons quotient and carry quite a heavy load.

ALBATROSS – Fear from the Skies