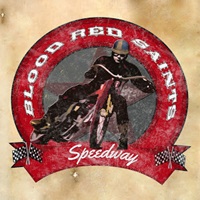 Forming last year, the quintet Blood Red Saints has ties through other known melodic hard rock/ AOR entities like Eden’s Curse (drummer Pete Newdeck), In Faith (vocalist Pete Godfrey), and Gary Hughes (guitarist Lee Revill) – rounding out the lineup with bassist Rob Naylor and keyboardist Irvin Parratt. Rich harmonies, uplifting melodic choruses, effective musical hooks from a guitar and keyboard based perspective – songs such as "Best of Me", the power ballad "The Best Thing", and vocally infectious "Wrapped Up In These Arms" sound like a great mixture of AOR class and melodic hard rock, mostly from an American perspective a la the early 90’s output from Def Leppard, Giant, and Hardline.

"Feels a Lot Like Love" has a lot of that Winger charm, a mid-tempo rocker that you could take to the beach on a warm summer day, Lee’s lead break containing just enough tasteful tapping to put him in the guitar hero category. I also love the racing "Kickin’ Up Dust" where Pete’s nasally inflection is actually quite endearing in almost a clearer Vince Neil delivery during the verses. The 67 second "CGRNR" is a cleaner guitar interlude that takes place near the last third of the album, an interesting placement that actually makes sense as opposed to starting things off.

Frontiers are the kings when it comes to pulling out all the stops for their musical visions and allowing the participants to showcase their true calling. Blood Red Saints is not a project but a new band – and their debut "Speedway" should give all melodic hard rock/AOR fans another record to embed itself into the followers’ hearts as it’s a shining example of good time music.