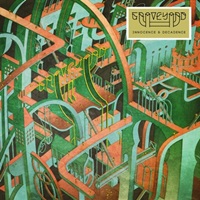 Combining classic hard rock, blues and psychedelia, Sweden’s Graveyard on their fourth studio album "Innocence & Decadence" pump out another 11 song document for the ages. Transporting minds and bodies a good four decades into the past, the swinging rhythms from bassist Truls Mörck and drummer Axel Sjöberg allow Joakim Nilsson and Jonathan Ramm to weave in playful guitar licks and combustible, spontaneous free flow segments even in short bursts. Jimi Hendrix soul penetrates "The Apple and the Tree", while Blue Cheer and English rock combine for the head splitting "From a Hole in a Wall".

You just feel a sense of camaraderie emanating from the speaker stacks, the quartet using old school tools while Joakim’s vocals have that Jim Morrison meets Neil Fallon swagger at times on the slithering, somber "Cause & Defect" while being a bit more Robert Plant-esque in phrasing and mannerisms for opener "Magnetic Shunk" (love the almost off the rails tempo shift during the instrumental section). Not everything is all distortion heavy – check out "Exit 97" for a bluesy ballad that wouldn’t be that far removed from some classic Thin Lizzy. Keeping the record at 42 minutes Graveyard absorb all the 60’s and 70’s influences and manage to excite and delight in their versatility.

A natural successor to 2012’s "Lights Out", Graveyard sticks to their strengths and safe haven of sonic influences to create another blockbuster of an album. "Innocence & Decadence" contains the blood, the sweat, the tears, the pain, the pleasure, and the work ethic of a group who may fit the retro mold but eclipse the tag based on their execution and songwriting abilities.