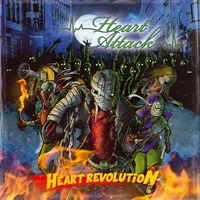 A Greek quintet that perform in a classic melodic rock/AOR mold for their first full-length "Heart Revolution", Heart Attack live for a sound renowned in the 1980’s by American acts like Bon Jovi and Tyketto, along with some Def Leppard and H.E.A.T. / Houston as their contemporaries. Surrounding themselves with heavyweight professionals such as Bob Katsionis (Firewind) and Tommy Hansen in the production and mixing/mastering departments ensures the quintet a robust, clear sound – the only question is, will the material stack up to their heroes?

On a musical scale, Heart Attack has a lot of great qualities. Guitarist Stefanos Georgitsopoulos has a lead style that is melodic and flashy, not too shred-oriented but certainly in a hero mold for work on uplifting tracks like "Tell Me" and the mid-tempo swinging "Stalker". Many of the keyboard tone choices also simulate the feel of the 80’s when David Bryan of Bon Jovi and Jim Peterik of Survivor ruled the airwaves – as "Playing with Fire" also has a similar hook structure as one of Bon Jovi’s early hits in "She Don’t Know Me". And of course what album in this genre would be complete without a power ballad to change the mood and showcase the sensitive side – "(You’re a) Nightmare" fills that slot and brings to mind a lot of Def Leppard qualities in terms of the clean to heavy buildups and harmonies.

One of the major weaknesses lies at the range of vocalist George Drimilis. His nasally, helium-orientation is on key for certain – some may wish for a little bit more depth and grit to carry certain songs, as "Under Your Spell" and the title track lose a little bit of impact due to his lack of versatility. Keyboardist Lila Moka also handles some of the verses and supplements George on choruses, and it could be beneficial to Heart Attack for her role to expand more in that department.

In the end "Heart Revolution" is a decent start for Heart Attack to put Greece on the map for the melodic AOR/rock genre.