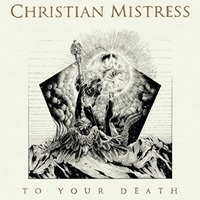 CHRISTIAN MISTRESS – To Your Death

Northwestern heavy metal band Christian Mistress have been slugging out quite a name for themselves through their recording and touring output since their beginnings in 2009. "To Your Death" is their third studio album, and after witnessing the band in the throes of a live tour with High Spirits and Savage Master, it’s no wonder that the quintet is ready to move up the ladder to headlining bigger clubs. What qualities though distinguish these musicians from the thousands of others who use a lot of 70’s/80’s metal influences as a platform for their own compositions today?

There are a few qualities that put Christian Mistress at the top of this new generation of US heavy metal – starting with the tandem axe skill qualities and tradeoffs from guitarists Tim Diedrich and Oscar Sparbel. The duo know when to build tension and momentum at certain impactful moments in any arrangement – check out the end of "Neon" or their darker, almost snake charming work that opens "No Place", it’s the stuff of legends like Thin Lizzy, Iron Maiden, Judas Priest, and UFO. Add in a rhythm section that can gallop and groove with the best of them, bassist Jonny Wulf and drummer Reuben W. Storey assert the proper tempo grace and charm to allow the musical hooks a chance to breathe and permeate the deepest recesses of your brain matter.

And then there’s the vocal prowess of Christine Davis. A lot of her particular inflections, range, and bluesy grit comes from more of a Grace Slick and Janis Joplin school than anything necessarily heavy metal – but for tracks like "Open Road" and the doomy "Lone Wild", it’s that extra special ingredient necessary to have your hair stand on end and produce endless chill bumps. Ending the album on a 3:41 instrumental "III" leaves the listener craving more – and you can just tell that this five-piece have a honed in sharpness to their craft, keeping the arrangements lean, tight, and energetic.

Kudos to Relapse for recognizing long-term vision with Christian Mistress. "To Your Death" could put them in a more commercially acceptable avenue without compromise- and that’s a great thing for the industry.