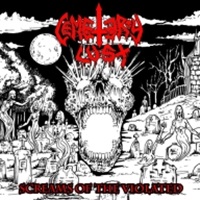 Ah… the days of early Teutonic thrash have now hit a second generation of musicians who want to push those ideals to a fresh audience. Portland, Oregon’s Cemetery Lust are a five-piece who develop a style they call ‘rape thrash’… don’t know quite what to make of that, but based on stage names like Disgustor, Andrew Angeldust, and Squid Nasty among others, it’s a theme they choose to differentiate themselves from the masses.

"Screams of the Violated" is their debut album, originally released on Headsplit Records. Hells Headbangers felt the world needed to hear these 8 songs in a wider format, so here we are. Speed, brutality, and non-compromise are three characteristics when taking in the music and screams of "Sexual Maniac", "Demonic Dementia", and the relatively mid-tempo closer "Night of the Creep". Early Kreator and Slayer would be two easy reference points in terms of the sheer raw attitude and angst put forth, the lead skills employing fierce tapping and energy while the vocals are slightly clearer than Tom Araya, but in that same 80’s mold.

Many can take or leave the word aspect of this band – listening from a pure musical perspective, Cemetery Lust live for the tape trading, early underground days when the focus was not about selling millions of albums. "Screams of the Violated" is 27 minutes of 80’s thrash worship, decent for what it is but probably not something that will set the world on fire.