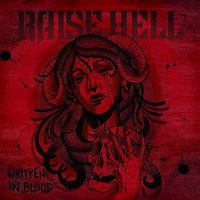 Nine years between albums seems like a lifetime to most metal listeners – but that’s the fact you’ll face when checking out Raise Hell’s newest studio offering "Written in Blood". Drummer Dennis Ekdahl parted ways in 2013, so the band recruits ex-Destruction drummer Sven Vormann to be the session guy for this fifth full effort. If you are expecting the Swedes to veer off their heavier melodeath meets thrash template, guess again – as these 10 songs continue to showcase a heavy, ripping sound that maintains integrity.

A lot of what you hear in terms of song construction and execution comes from a Teutonic thrash meets Gothenburg death groove fusion – the rhythm section providing a lot of the latter sonic power while the riffing and raw growls/screams from vocalist Jimmy Fjällendahl fit firmly in the former category. Occasional nuances of exotic, Middle-Eastern guitar lines appear during an instrumental section for dynamic contrast – "Fallen Domination" illustrating this best, Jonas Nilsson serving up layers of harmonic hooks amidst his normal chugging rhythm guitar responsibilities. Early In Flames can come into focus during the higher melodic strains for "Demon Mind", but the mid to up-tempo riffing has a lot of Sodom/Destruction textures, tailor made for audience head shaking and slamming.

Raise Hell pay careful attention to not keeping all these songs into a similar feel or tempo pace. For every aggressive, balls out number like "Dr. Death", you’ll get the more straightforward, mid-tempo track such as "The Bell of the Reaper" or the stop/start, clean to speedy "Thank You God" so the head can consume all facets of the band’s abilities. In fact, the only minor disappointment comes up on the Johan Ankarfyr cover art – a little too basic in my eyes to match the musical proceedings.

Well worth the wait, if you’ve loved "City of the Damned" from 2006, this is a killer follow up and hopefully as a result we won’t have to wait until the 2020’s to get a sixth Raise Hell album.

KATAKLYSM – Of Ghosts and Gods