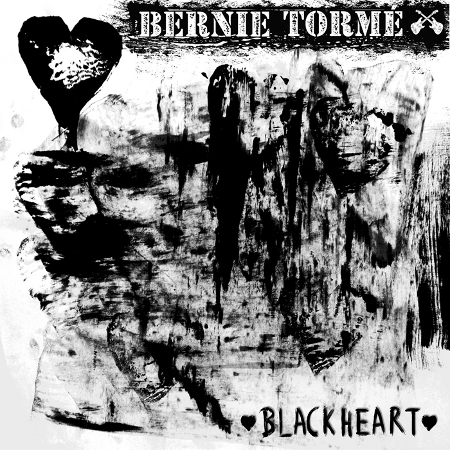 Legendary guitarist Bernie Torme (ex-Gillan, ex-Ozzy Osbourne, ex-Atomic Rooster) has returned with a follow-up to last year’s excellent album, the one that was named "Flowers and Dirt". This brand new musical output, which is entitled "Blackheart", contains twelve awesome and mindblowingly catchy tunes that are filled to the brim with great riffs, amazing basslines, rum-soaked vocals, and heavy drums. The music is somewhat psychedelic and almost hypnotic in places, yet beautifully intense and hard rocking, too. Torme has a sound and musical identity of his own that is totally unique, not only in terms of how he writes riffs and melodies and so on, but also in terms of the actual arrangements as well as the moods and atmospheres evoked by and within his songs. Bassist Chris Heilmann does a great job and compliments Bernie perfectly while the drummer, Ian Harris, is solid as hell and lays down a fat, heavy beat.

The songs that constitute "Blackheart" are slightly more varied and dynamic compared to those that made up the previous album, "Flowers and Dirt". For one thing, "Blackheart" contains straight-up hard rocking tunes that are in-your-face, highly energetic, and fun to listen to, but the gentle and melancholic "Miles to Babylon" and to some extent "Flow" are something else entirely and they are very moving and emotional compositions. I really like the diversity of the album, and you can really tell that these guys are enjoying themselves and having fun playing. The shredding guitars, the intense riffing, and the unique vocals are all there, but the mellow and more moody stuff that creeps in from time to time, both musically and lyrically, add another dimension to the album and gives it a lot of substance.

While some of you out there may only be familiar with Bernie Torme’s work with Ian Gillan (in the Gillan band) and to some extent Ozzy Osbourne (when he toured with him back in the early 80s), I strongly encourage the open-minded listeners out there to check out "Blackheart" and simply lose themselves in its wild, strangely fascinating, and highly passionate musical landscape. This is raw, organic, and authentic rock music that falls somewhere inbetween hard rock, sinister blues, and vintage psychedelic music, but at the same time it is something that simply cannot be classified easily. As you can probably tell, I am having a hard time labeling or categorizing this stuff, but who the fuck cares? The quality of the album speaks for itself. Support Bernie Torme and buy this record!