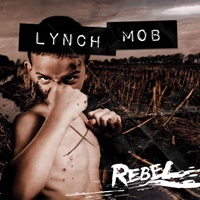 George Lynch: axe hero, solid performer, adept at a variety of hard rock and metal styles – these are a few ways I would describe the guitarist who won over a lot of people with his playing through Dokken in the 1980’s. After the band’s split in the late 80’s, he would assemble Lynch Mob with vocalist Oni Logan, bassist Anthony Esposito and fellow Dokken compatriot Mick Brown on drums. The debut album "Wicked Sensation" has always been a steady record to take in, another strong melodic hard rock offering that may not have been as huge as it deserved to be when alternative/ grunge music took over the commercial scene.

Fast forward to 2015 – Oni has reunited with George, "Rebel" contains another Dokken member in the studio mix (bassist Jeff Pilson) while veteran drummer Brian Tichy rounds out the recording lineup. So it shouldn’t be surprising that seasoned talent would release an engaging top to bottom affair that has a lot of retro-vibes while still maintaining a current production to kick your face in and take names later. Lynch serves up all the licks, taps, and tricks that made him a superstar – while never forsaking the bluesy, feel aspect that is necessary from a hook and memory outlook.

Songs like "Between the Truth and a Lie" and the deep, bluesy ballad "The Ledge" see the band explore harmonies and a see saw retro-feel, Oni gaining a lot of respect for using all textures of his rich voice a la the classic crooners from Gillian to Coverdale. It’s as if the understated guitar work and tempos make me think the band has been looking at a lot of their early influences in childhood or King’s X – when artists explored versatility instead of staying in a high energy comfort zone. The darker tone displayed in "Sanctuary" allows Pilson and Lynch to build off of each other, as Tichy drives home the groove. I don’t even mind the obvious UFO/ "Lights Out" marching riff twin orientation that takes over the finale "War" – Oni using his dramatic melodies as exotic flavoring for another album highlight.

Not chasing any particular trends, "Rebel" is pure great melodic hard rock, and an 11 song record that all Lynch Mob fans will be very pleased to spin a few hundred (or thousand) times.

BLAZE OF PERDITION – Near Death Revelations