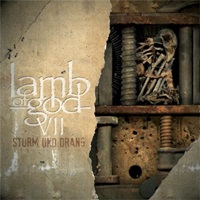 The seventh studio album from Richmond, Virginia’s Lamb of God comes after the long-trial that vocalist Randy Blythe faced in the Czech Republic for a fan who died in 2010 at a LoG show – where he was accused of manslaughter by throwing him off the stage. Lyrically Randy used the prison time to write a lot of the words for "VII: Sturm Und Drang", including the history of Pankrác Prison for "Still Echoes" and his cell number for "512" where he contemplated his fate.

Musically it’s still a mixture of their punk, metal, and groove tendencies that just make people want to form huge pits and smash into each other – songs like "Embers" and "Anthropoid" possessing this mechanized sonic punch in the drums and guitars that enforces synchronized stomping or screaming. Occasional blast beats punctuate the chaos that is "Still Echoes", while "512" has some narrative talking elements that sit comfortably against this mid-tempo groove march and occasional guitar lines that mirror Gojira. It’s not easy in this genre to remain relevant and special 15 years into your style, but somehow Lamb of God put their all into every ounce of their craft, which pays dividends in the long run.

Randy pours his soul into his twisted roars, growls, and screams – making "Engage the Fear Machine" and "Erase This" (love the guitar talk box nuances on the latter) two of the best moments on the record from a vocal perspective. You would never have thought that a band with this aggressive of an approach would ever become a mini-arena headlining act, but Lamb of God prove that their wide-reaching fan base is adamant to keep them near the top. "VII: Strum Und Drang" won’t disappoint the legions, and that’s what matters most in metal, right?