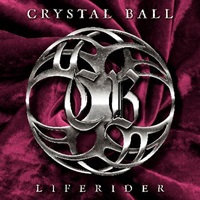 Swiss melodic hard rock/ metal has always resonated well across international waters- names like Krokus and Gotthard have been able to appeal to a wide cross-section of older and new followers. Crystal Ball follow in that tradition, back with their eighth record "Liferider". The main album contains twelve songs, while the digipack has three bonus cuts – and special guest appearances from Battle Beast’s Noora Louhimo on "Eye to Eye" plus background vocals for "Mayday!", while producer Stefan Kaufmann plays acoustic guitar on "Memory Run" as well as background vocals on another track.

Most of the material follows a very straightforward context, certain songs have a more anthem-oriented approach in the Accept/Priest tradition like "Balls of Steel" and "Antidote", while others sure emphasize the melodic hard rock / commercial slant, be it through focused chorus work or instant musical hooks (place "Mayday!" and the Ozzy-like title cut here). Vocalist Steve Mageney has one of those voices tailor made for arenas and rock radio, sensitive when necessary on slower material like "Memory Run" but then very explosive and energetic on a number like "Take It All" – again bringing comparisons to Rob Halford and possibly Pretty Maids’ Ronnie Atkins. The production has that typical, digital / mechanical overview that Stefan Kaufmann prefers, which can be a good or bad thing depending on your sonic preferences. I will say it doesn’t affect my enjoyment of the songwriting or performances, and you’ll probably find yourself singing along or head banging to the riffs/hooks.

The digipack version has Crystal Ball taking on Dio’s "Sacred Heart" and Black Sabbath’s "Sign of the Southern Cross", and the band pays respect and reverence without changing things up too much. Given second life since their reformation in 2013, "Liferider" is another prime example of superior Swiss melodic metal.