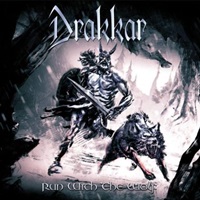 DRAKKAR – Run with the Wolf

An Italian power metal band with an epic foundation, Drakkar return relatively quickly for their fifth studio platter "Run with the Wolf"- three years beyond their last "When Lightning Strikes". The quintet now have a steady lineup in their ranks, and deliver another testament to the fantasy laden, warrior battles of their lyrical dreams fueled by high pitched vocals, mead hall choruses, and guitar/ keyboard workouts amidst a ton of mid-tempo/ epic hooks.

Songs such as "Burning", "Under the Banners of War", and "Call of the Dragonblood" possess a lot of qualities that bring up older Blind Guardian, Manowar, Saxon, and Dio – although vocalist Dave Dell’Orto has a strained and semi-accented nature to his Matt Barlow meets Eric Adams delivery that can make this tough sailing from some ears in the choppy waters. The title cut has a distinct Deep Purple flavor, especially in the main opening bluesy riff choice for guitarist Dario Beretta that would make Ritchie Blackmore gleam. Those who choose to pick up the CD get 5 bonus tracks – re-recorded versions of songs from their first 3 albums, of which "Eridan Falls" and "Dragonheart" work the best as far as stronger, modern production values and keyboard orchestration advances that have taken place in the 16-18 years since these songs originally appeared.

No real surprises here, as I feel Drakkar is very content in their style and creative output through their career. Keyboardist Emanuele Laghi has more of a Jon Lord/ Rainbow-esque outlook to his organ and piano play, which is a welcome comfort from the normal arpeggio scale race that most in the power metal community employ. Overall, "Run with the Wolf" isn’t going to elevate the band much beyond hometown hero status, as it’s adequate but nothing earth shattering.