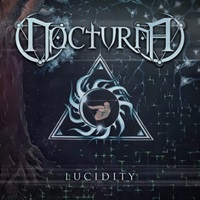 Symphonic power/progressive metal is probably not at the top of the UK scene, so when a band like Nocturna comes around with their debut EP "Lucidity", you take more than a cursory glance at the proceedings. The quintet develop a sound that is melodic and progressive, the drumming in line with Children of Bodom while the keyboard flourishes from Josh Vigus have Symphony X meets Nightwish textures. Guitarist James Davis as the main vocalist has a helium oriented range, more in line with power metal artists like Freedom Call or older Nocturnal Rites on songs such as "Revelations" and "Gaining Solace".

The 10 minute plus closer "Cast Assured" opens with some Firewind oriented driving riffs wrapped around stunning shred-oriented leads before the cinematic keyboards and double bass drumming takes the song into majestic lands. The band also incorporate some modern metal screams from fellow guitarist Tom Frost and a boatload of harmonic elements in the final portion of the song – hopefully something that Nocturna continues to explore on future recordings. They mention in their social media outlets the desire to create music ‘to please everybody’- and believe it or not, I do find this 30 minute recording extremely enjoyable from a songwriting and progressive standpoint, while also being melodic, engaging, and entertaining.

4 songs in the main outside of the intro and interlude, Nocturna should be able to ascend the ladder and possibly gain a reasonable record deal based on their multi-level approach to the genre. Even the choir accents that reverberate throughout the spider web lead work in the title track have this charm that you don’t hear from most UK acts. In the end, this is a self-released gem that is worth checking out.