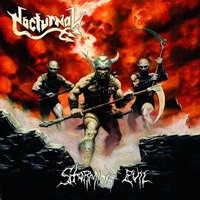 Forming out of the ashes of Bestial Desecration in 2000, Nocturnal is a German blackened thrash act determined to keep the spirit of their early Teutonic roots alive and thriving. They’ve released a number of albums, EP’s and split releases in their 14 year plus existence – as "Storming Evil" is their third full-length studio record. Assuming nicknames as Vomitor, Tyrannizer, Avenger, and Skullsplitter, the four-piece perform in a similar primitive and sinister manner – the 10 songs unleashing a raw, frantic representation of a style held in high esteem for its underground philosophy and execution.

What can you expect out of "Tyrants of Damnation", "Crushing the Bones", and the 8 other tracks? Screams from the black sky, pounding drums, a deep bass tone and buzz saw guitar parts that make me think back to the 1980’s when Destruction and Sodom were out to be the fastest, purist primal bands on the face of the earth. The brief blast beat appearances for "Preaching Death" have a purpose without ruining the thrash riffs, while "Taken by Fire" at 6:55 begins in more of a casket leading doom march, giving the listeners a little more of their epic, musical oriented qualities. Polish and crystal clear production are two qualities Nocturnal choose to steer away from – and that’s fine by me as the darkness and heaviness win me over each and every time I return to "Storming Evil".

Brilliant material here, especially if you enjoy those early blackened thrash bands who were fighting for the fans and not chasing down and specific trends.