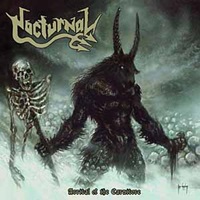 Having recently taken in the latest studio album from German blackened thrashers Nocturnal "Storming Evil", another record label MDD felt the time was right to re-issue their debut album from 2005 called "Arrival of the Carnivore". Originally released on From Beyond Records (a sub-label of Displeased Records), this 34 minute effort is another strong document for those who love a lot of the early Teutonic thrash movement – digging deep into the early days of Destruction, Assassin, Exumer, Sodom, and Living Death.

Mayhem, violence, and a healthy dose of Satan handles most of the lyrical topics as far as "Satanic Oath", "Burn This Town", and "Awakening the Curse of Souls" is concerned. The drumming is basic and frantic, the stop / starts equally raw and chaotic, yet somehow Nocturnal figure out a way to keep the train rolling without completely falling off the tracks. Vokills by Mayhem contain the requisite rapid fire delivery and high pitch scream exclamations to allow "Temples of Sin" and high octane "Merciless Murder" to rival the best Mille or Schmier rippers through their careers. The lead breaks from Avenger aren’t going to put the band into the elite shredders of thrash, as the purpose is again an extension of energy and more about audience impact versus ‘look at me’ egotism.

Given the fact that "Arrival of the Carnivore" has been out of circulation for quite some time, those who loved "Storming Evil" and desire to seek out their back catalog would be well advised to purchase this. Let the blood flow, the head bang, and the raw thrash riffs and tempos to command the airspace.