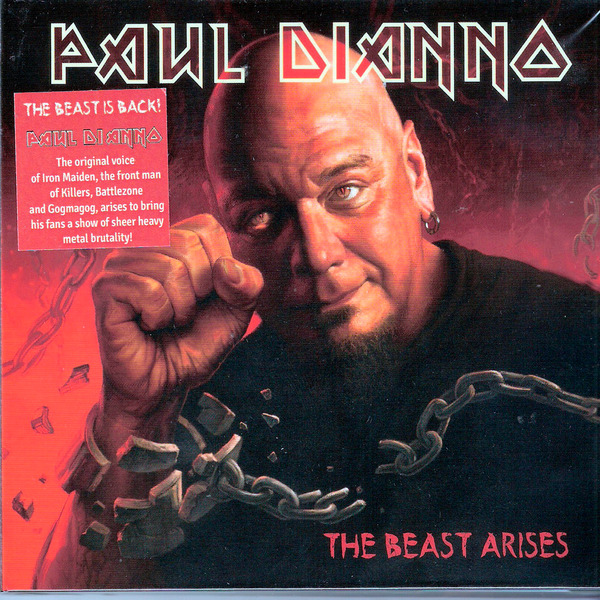 Legendary vocalist Paul Di’Anno needs no introduction as he handled the vocals on two of the very best heavy metal records of all time, namely «Iron Maiden» and «Killers» by Iron Maiden. Need I say more? Right, let us get on with it then, shall we? «The Beast Arises» is quite the entertaining and interesting release. Actually, it was released on both DVD and CD by Metal Mind Productions, and I was lucky enough to receive a copy of this cool release on both formats, which is quite neat. While I tend to listen to the CD way more often than watching the DVD, there are a few notable differences that ought to be pointed out and mentioned: the CD contains 15 tracks while the DVD contains 17 and also features an 11-minute interview with Paul Di’Anno and a few other things.

«The Beast Arises» is a live album/DVD that was recorded and shot in Krakow in Poland back in April 2014 with Paul Di’Anno being backed by a Polish heavy metal band. The majority of songs that were performed that night are Maiden classics off that band’s first two masterpieces. In many ways, Di’Anno was commemorating those two all-time classic albums. However, a few other tunes such as «Children of Madness» (by Battlezone) and a cover of the Ramones track entitled «Blitzkrieg Bop» also made it into the setlist. While Di’Anno is quite the imposing figure on stage these days, he appears quite happy and content judging from his stage banter on this particular release. He continually praises and thanks the Polish crowd for their support, and his introduction to «Remember Tomorrow» in which he laments the loss of former Iron Maiden drummer Clive Burr is both touching and heartwarming. On the other hand, he also lashes out at a few things from time to time, which can be quite entertaining in my opinion, but the politically correct might disagree with that. Anyway, while his bad knee is keeping him from moving around on stage a lot, he does seem to get the crowd going and get them to sing along and so on and so forth. The Iron Maiden songs are performed in a slightly more brutal and heavy manner compared to the original versions, and  Di’Anno almost growls and screams along to the songs at times. One cannot expect the man to sound like he did 35 years ago in my opinion. «The Beast Arises» is merely a different take on those old classics, so do not expect any note-for-note renditions of them. Di’Anno is slightly off-key on a few occasions, but this is a live document and he is not exactly 19-20 years old anymore, so deal with it!

«The Beast Arises» has a certain underground charm and atmosphere to it that appeals to me. It is honest and unpolished, which gives it a certain raw edge, but nevertheless the sound is quite powerful and in-your-face. The way that the DVD is shot takes you quite close to the stage, which is pretty cool, and the whole thing is quite professional looking. Like I said, the DVD contains a couple of more tracks than the CD as well as all the stage banter and humor and insults and so on, but I prefer to simply pop the CD into the record player and listen to that whenever I am in the mood for some Di’Anno.