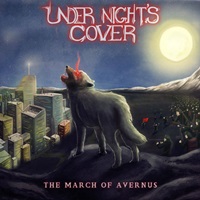 Starting in 2009, Sydney, Australia’s Under Night’s Cover have been carving out their traditional/progressive metal sound for a few years, settling into a permanent quintet lineup and finally releasing their debut EP "The March of Avernus". There seems to be something special in the land down under when it comes to their craft, as they are able to take a lot of influences from American and European shores to hone in on an aggressive but musically exciting style.

After a brief 44 second "Ambush" intro, the galloping riffs and diverse traditional metal tempos burst forth on "Yesterday…When the Peace Ended", throwing at us everything from Machine Head/ Nevermore like slower, staccato oriented heaviness during the instrumental break through the verse/ chorus parts that contain a lot of Iron Maiden and Megadeth qualities. Guitarists Hayden Weidner and Jacob Cummins light up their fretboards in a prolonged solo break, each getting their part before teaming up in twin harmony heaven during the arrangement’s conclusion. "Euphoric Desolation" opens in acoustic fashion, before giving way to more epic-oriented electric guitar that recalls their Aussie brethren Lord (possibly going back to their Dungeon days) – vocalist Johnny Guagliardo resonating in more of a fierce, raspy delivery like a clearer James Hetfield.

The 5 songs in the main give the listener plenty of riffs and melodies to take in, Under Night’s Cover not going for necessarily the shorter attention spans of commercial radio in their 5:33-8:14 oriented compositions. The longest track "Depraved" for instance opens in 80’s Metallica fashion before a semi-blast beat and almost death-like runs give way to a mid-tempo, progressive thrash roller coaster – probably the most intricate song on display that keeps your ears and brain attuned for anticipation. I’d like to see them go for a more professional looking logo – but that’s splitting hairs when 95% of the package and performances are of such stellar quality.

Ideally the next release from Under Cover’s Night will be a full-length – as "The March of Avernus" has all the right tools to appeal to a lot of traditional, progressive, and power metal followers.