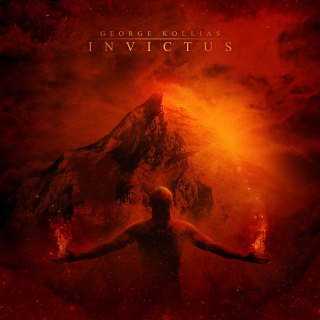 I am a big fan of drummer George Kollias but just can’t get into Nile at all so I am delighted that now that George has recorded this first solo album I can enjoy him without all the shite of that overhyped death metal institution. First fact up is quite an amazing one when you hear the album: Kollias plays every single instrument on here and does the vocals as well. Holy shit is all I can say to that! Of course the drums are outstanding, but all of the other musicianship is top notch too.

So the next question is this – is he any good as a songwriter? The answer is yes and no – Kollias takes a relatively simplistic approach to create a varied but essentially quite conventional slab of Floridian DM. Yes, the songs are fine and there are plenty of ‘moments’ but even with the more progressive elements that creep in as the record spins on, the sound doesn’t really get any deeper or offer up any more to the listener.

Overall then, I can say that I have enjoyed and continued to enjoy this record. It is a very cool album. But, I don’t feel that it is going to yield much more and that will probably mean I return to it less and less over the next few months… having said that – I don’t think it is an album that would disappoint if you purchased it, so it could well be worth a try.