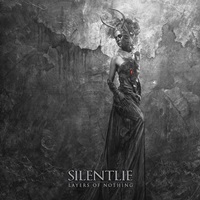 Slow and measured development in a band’s career arc can win the race in establishing a permanent following. Italy’s SilentLie for instance have been honing their gothic hard rock/ metal craft since 2005, releasing two EP’s "Behind the Face" in 2008 and "Blood Under Snow" in 2013 before signing with Bakerteam and going to work on this debut full-length "Layers of Nothing". Initially starting out in a male-dominated field, the quartet consists of three male musicians and a female vocalist in Giorgia Sacco Taz- who chooses to float between confident/ vibrant siren overtones while injecting a lot of metal passion and grit to her delivery.

A lot of the guitar riffing has this dark, melancholic quality that combines the much missed Sentenced with elements of 90’s era Paradise Lost circa "Draconian Times"- check out "My Scream Is Silence" and the peppy title track for these reference points. SilentLie aren’t afraid to dig deep into the roots of metal as well – "Change" is a doom-laden affair that would make the forefathers Black Sabbath very proud, Giorgia choosing to use a more laid-back verse approach to echo the haunting riffs and slower tempo. The modern aspects come into play in terms of techno/cyber-oriented keyboards and computer enhancement, yet not to the determent of the hooks and energy at hand. "Unbreakable" and "Dark Nights" easily two numbers that should excite and elevate the live atmosphere should SilentLie choose to roll these out in their future set lists.

"Layers of Nothing" has more of a commercial sheen to things, but I don’t think they are trying to step on any particular act’s territory. SilentLie keep their focus on lean songs generally in the 4 minute framework, and as such provide plenty of entertainment for the gothic hard rock/ metal fanatics of the world.