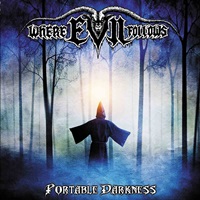 Ex-Onward guitarist Toby Knapp felt the need to work on another power/speed metal outfit, and out of the ashes we have Where Evil Follows and their debut album "Portable Darkness". Vocalist / bassist Dean Sternberg is the other main member, while programmed drums flesh out the sound. The crux of these 8 songs traverse power/speed metal lines similar to Onward, and yet with a touch more heaviness and progression in the Destiny’s End / Vicious Rumors template.

Sure, Toby picks his spots for exemplary technical proficiency during the lead breaks of "Oppressive Grey" and "Reborn" (the latter featuring a killer Steel Prophet like harmonic section at the conclusion of his soloing), but he also writes steady riffs and hooks, while Dean has a potent multi-octave range and can hit those Halford/ James Rivera-like highs without a problem. Check out some of his note-sustaining abilities on "They Came For Us", it’s the type of stuff that gains rapturous applause and praise for certain. Occasional raspy/ extreme vocals add that dynamic nuance to "Lifting the Veil", and you also gain a respectful rendition of the Black Sabbath cut "Disturbing the Priest" off the sole Ian Gillian album of their career, 1983’s "Born Again".

Those who miss a lot of the speed/power from the mid to late 80’s scene would be wise to pick up "Portable Darkness". An underrated sub-genre for sure, but one that ardent metal fans treasure – and there’s nothing wrong with some fresh blood to add to the mix. Support this and increase the possibility for a follow up, as Where Evil Follows beyond being a great moniker has the musical/ songwriting skills to deliver the goods.