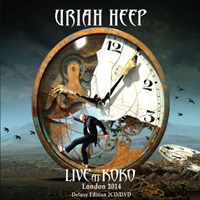 Surely the legendary Uriah Heep need no introduction. They were without a doubt one of the earliest progressive hard rock bands in existence and their influence on the bands that followed them, Iron Maiden being just one of them, is both considerable and immense. These guys started out way back in 1969 for crying out loud! "Live at Koko" is a brand new 2-disc album/DVD recorded in London last year and contains a list of songs that ought to make most fans of the band drool. Needless to say, a lot of the classic tracks by the band are aired, but also a couple of new songs off the album "Outsider" creep into the setlist, which is great I think. There is both old and new stuff, which is to say something for everybody. The band is in great shape and every member is right on the money. No fucking around. The recording has a lot of atmosphere to it and you can tell that the fans are absolutely loving and digging the whole thing. The mix is quite good and every instrument is suitably clear and punchy, so no complaints there. While "Live at Koko" is neither brilliant nor mindblowingly awesome, it is nevertheless a very strong and solid effort, and if you close your eyes you can almost imagine what it was like being there in the crowd on that particular night. I dare say that all fans of Uriah Heep and progressive hard rock in general will find this release captivating and interesting. I sure did.